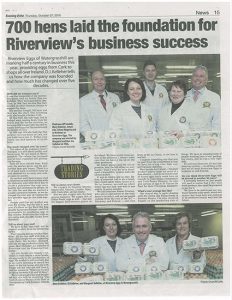 DJ Kelleher recently did an interview with David Linnane of the Evening Echo, see below for more.

How did the business start?
It was the brainchild of my mother, Margaret, and my father Dan-Joe Kelleher. They were married in 1965. Then in 1966 they decided that they needed another revenue stream to support the farm.  My mother then went and bought 700 hens and that was the start. The following year, she bought a further 2,100 hens. At that time the only eggs laid in Ireland coming down from the North and in the border counties, so here was this woman who was able to supply fresh eggs for the markets and the people in Cork. In 1969 and 1970 she put up the first purpose built hen house in Cork, and put 6,000 hens into it. Within four years, she had the bones of 10,000 hens.

Has much changed over the years?
The ethos of the company hasn’t changed, it is still about quality and local. We are based in Watergrasshill. The volume has increased and we have expanded into packaging the eggs also. Now we have 350,000 hens. Each year, the market grows and the production base grows. There is a lot of hard work involved to keep up with demand but never ever compromising on quality. My mother and I have always tried to be proactive and have worked with the industry and with Bord Bia to create a guarantee that eggs were healthy and nutritious for people. In the late 80’s and 90’s we wanted a quality assurance scheme, so we developed the best way of creating the best possible eggs for the Irish market. People said that my mother was nuts for trying, but she did it, and now it’s there as the Bord Bia Egg Quality Assurance Scheme, and that’s a prerequisite for producing eggs in the republic. Riverview also holds an AA status with the BRC Global Food Standard.

Tell us about your staff.
We have 23 full time staff, and we support another 40 staff on our producing farms. That’s people like my brother Mortimer, who produces eggs for me. He has two staff with him, so that is three people we are supporting right there. My brother Richard also has an egg production farm too. My sister Mary Kelleher is a Director of Riverview and the financial controller. All our farms are family run, which in turn means a more hands on approach to the production of eggs. My mother is still involved. She is up every morning to spend two hours in the hen house, and she is 79. People ask her why she still does it, and her answer is “What else would I be doing between 8.30 and 10.30am”.

We are all so proud of her and delighted that she will be awarded ‘The Cork Business Woman of the Year’ at the upcoming Cork Business Awards 2016.

Tell us about your clients.
We supply to Dunnes Stores, Supervalu, Centra, Londis, Spar, Aldi, Costcutter, all the chains. But we also supply into the food service industry. We supply 90% of Pallas Foods’ eggs, the biggest foodservices player on the island. We have a total cross section of the industry. I always make sure that we have a leg up on the other producers. My father always had the old expression; don’t be left sitting on your hands. That’s why we developed a traceability system with GS1 Global in 2014. It was so simple and so easy. Before, if someone had to do a recall, they would spend hours at it. For us, we could say where every egg was laid and sold to in seven minutes. We had Minister Simon Coveney, who was in agriculture at the time, down to launch it, and we had people coming from the EU, the UN, people from China, Germany, and Poland, all coming over to see how it worked. I suppose something else that sets us apart from the competition is that we have for a long time been supporting local charities. Most people don’t know (because we don’t tend to make a fuss about it) but we do donate over 30 dozen eggs every week here on Leeside to Cork Simon Community and Cork Penny Dinners, we also give cartons of eggs to St. Vincent De Paul for their Christmas Hampers.

What’s your average day like?
My typical day is spent dealing with the clients like Pallas Foods or Dunnes Stores. I’m also involved hugely in the marketing side of things. We have an amazing team of people here at our packaging centre, and we run a very tight ship.  It’s not just about me, it’s not just about my Mother. We all have a role and we all want Riverview Eggs to continue on and flourish.

Do you think Riverview Eggs will be around in another 50 years?
I certainly believe so, but people will need to realise that if they want fresh produce, they must be prepared to pay for it. We have to be able to pay our producer farmers a fair price, which will ensure that fresh food will continue to be produced locally well into the future.

Riverview Eggs Take Centre Stage at the International Egg Conference in Mexico
November 19, 2015
Go to Top
This website uses cookies to improve your experience. We will assume that you are ok with our privacy policy, you can opt-out if you wish. Find out more.